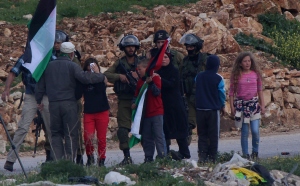 In the end, no matter how it starts, the same pattern plays out over and over at demonstrations in Israel-Palestine; the same drama, unfolding in the same acts. It’s a call-and-response – a kind of perverse tango – that begins with a demand for basic human rights, and ends with (or is temporarily derailed by) a violent putting-down, by either state or individual actors, or sometimes both. In part one, the freedoms requested may differ – for homes not to be destroyed, for land not to be stolen, for lives not to be taken – but the expressions are the same: walk, chant, shout, hold signs, hold hands, hold on. In part two, whichever side of the Green Line you are on, the order of play is again the same, even if the props are different.

I have watched in Nabi Saleh as Israeli army snipers shot live ammunition at Palestinian teenagers and as Border Police fired tear gas canisters directly at unarmed demonstrators; as a group of Palestinians asking Israeli security forces for their land back received a response in the form of stun grenades hurled at them; as a teenaged girl sobbed while watching her (unarmed, peaceful) father being hauled away by members of the Border Police, his hand reaching back towards her in desperation. I have watched in Beitunia as snipers shot live bullets at more Palestinian teenagers who were protesting on the anniversary of Nakba Day, two of whom were later shot to death. (And yes, the violence at Nakba Day demonstrations is worse, because only one people is allowed to grieve over a defining national tragedy here, and it isn’t the Palestinians.) I have watched in central Tel Aviv as extreme right-wing nationalists came to break up protests against the slaughter in Gaza, wading into a crowd of demonstrators and hitting, shoving, throwing eggs and other objects, with minimal interference from the police. And today, I watched in East Jerusalem – during a demonstration against the Judaisation of Palestinian parts of the city – as the police and Border Police assaulted unarmed protesters for having the audacity to carry signs calling for an end to the Occupation; as elderly women were manhandled by big men with big guns and bigger frowns; as the façade of democracy that many still insist exists here was violently exposed for the fraud that it is.

Yes, we all know our lines here. Everyone is used to the ironic, inverted cycle of violence that is the hallmark of repressive regimes, in which non-violent calls to end violence are met with further violence. We seem doomed to repeat the same punishments, as if we were characters in Dante’s Inferno. And yet, there is a defiance to these protests which uses the logic of the Occupation against its enforcers. As one will often hear from ex-soldiers with Breaking the Silence, much of the mandate of Israeli security forces is aimed at ‘making our presence felt’ (this is particularly pronounced in Hebron, from where many of Breaking the Silence’s testimonies come): the raids, arrests, war games, intimidation and restrictions are there to remind Palestinians that they are a subjugated, captive population, always surrounded, always being watched. But in turn, so are the protests a demonstration of presence – the presence of those who are subjected to the Occupation, and those who are not but nonetheless oppose it. They are a reminder that in spite of the crushing brutality and scale of oppression here, those trapped within the apparatus of structural violence will not fade quietly into the night. When faced with a vast, state-administered machinery aimed precisely at attacking a society’s very presence in its own land, reasserting that presence becomes an extraordinary show of resilience.

The violence, however, is undeniably increasing. As the Occupation entrenches itself more and more; as the legacy of the Nakba grows ever longer with no acknowledgement of responsibility and therefore no possibility for its victims to truly grieve and thus heal; and as the infringements on human rights continue to mount up, so do the demonstrations multiply, along with the aggressive culling of the sentiments expressed within them. We are reciting the same lines, only louder and faster, and even as our voices get hoarse it seems we will never be allowed to run out of words. There are so many here crying out for the curtain to fall on this insane drama, even as those in power are determined that the show go on.