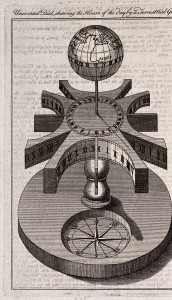 North was not always the “default” or “top” cardinal direction on the compass. At various times, south and east were, too, depending on who was doing the orientating. (And there’s another clue in the word “orient” – when you orientate yourself, the implication is that you are setting yourself according to the east, or via the rising sun. When you disorientate, you lose the east, as Salman Rushdie wrote in “The Ground Beneath Her Feet.”)

In Arabic, the word “shimaal” means left, but it also means north – which if you are facing east, makes sense. Similarly, the country Yemen takes its name from “yameen,” which is Arabic for “right.” Yemen is in the southern part of the Arabian peninsula – which of course, when facing east, is on the right.

The same is true in Arabic and Hebrew. The word “east” in Arabic is “sharq,” coming from a root word that means “to rise”; in Hebrew, it is “mizrach,” which also comes from a root word that gives us the verb “to rise” (it also gives us the Hebrew word for sunrise, which is “zricha.”) West, in Arabic, is “gharb,” which comes from a root from which the verbs “to leave” or “go down” also derive. And, indeed, the sun does leave us at the end of the day. This is where we get the word “Maghreb” from, too – for North Africa of course lies to the west of the Arabian peninsula. (The same root has also produced the word “ghurba,” which means “exile” – thus inextricably linking the concept with the West. Disorientation, indeed.)

In Hebrew, “west” is “ma’arav,” whose root has also given us “erev” – evening – and, yes, a verb related to the setting of the sun/time of day (accounts vary as to whether it is the verb “to mix,” which would refer to the mixing of day and night, or “to enter,” based on early man’s idea that the sun entered a tent to “sleep” every night).

So next time you are giving directions, especially on the east-west axis, remember that you are not only referring to a physical place, but also a place in time, and the movement of the sun. And remember, too, that each reference to east and west is also a subtle reminder of the passage of time.